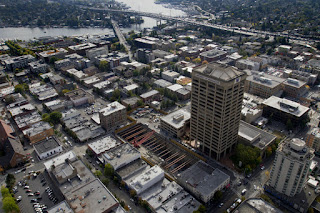 Since we originally published the mayors proposed zoning changes to the U District, there are emerging discrepancies between housing activists and city planners regarding what the net impacts to affordability, lost housing units and displaced households will be.  See the updated Times article here.

Original post from 10/15/16:
Zoning changes throughout Seattle have driven a boom in large residential projects, including West Seattle and Ballard among others- and the University District looks to be the next new frontier.
​
Seattle Mayor Ed Murray on Monday unveiled a growth plan for the University District that includes some major zoning changes now headed to the City Council. The zoning changes, by allowing developers to build taller, would trigger a new program requiring them to include some rent-restricted units in their projects or pay to help build such units elsewhere.
The UW has been pushing for its namesake neighborhood to grow into a dense “innovation district” for tech startups and workers. But skeptics are concerned about impacts to low-income residents, small-business survival and open space.
​
Interestingly, the growth in rental units throughout Seattle hasn’t significantly impacted rent rates, although some areas have seen slower growth in rents, and smaller properties have to be adept and competing for qualified tenants.
The full Seattle Times article on this item was posted here.
Posted by Ricky at 4:11 PM